Posted on September 6, 2015 by Sydney Janitschke 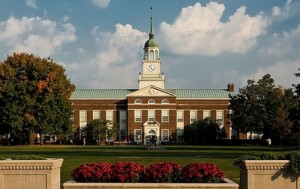 Freshmen encounter massive amounts of culture shock when they head off to college. My experience at Bucknell so far has been no exception. I came to Bucknell early through a pre-orientation trip and that is when the “Honeymoon” phase of my college culture shock began.

I was very easily impressed by everything that surrounded me. I was wowed by all of the buildings and the professors walking by. Even the greetings that other students gave each other felt foreign, but oddly fascinating, and exciting that I would someday be a part of that too. The whole atmosphere of college gave me a thrill. However, all honeymoon periods must come to an end.

I hit a wall once classes started. The whole campus felt very disorienting to me with people rushing about heading from place to place. Having homework piled upon me the first day was stressful. All around me it seemed like everyone seemed to know everybody else and it felt like I knew no one. People also behaved a lot differently from the Midwestern values than I am accustomed to. Also, the familiar tastes and smells I was used to were very different from the ones at Bucknell, which only increased my anxiety and feeling of displacement. Many of the barriers I faced were based on self-reliance. Beforehand I had parents to help me out, but now I was on my own. It seemed a little frightening to have to do everything myself from finding my way around to fixing my schedule, buying books, going to health services, and trying to put names to faces. 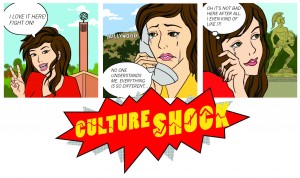 So far, I have experienced more disorientation than hostility during my time here. Sure at times I got angry at how Bucknell was run differently from my old high school, but then I just learned to accept it. This is a new environment and I can’t expect it to run exactly the way I want or expect it to run.

After two weeks of being at Bucknell I feel that I am at an “Adjustment” stage in my experience. I’ve started to adjust slowly to some of the norms around campus and now I can keep track of some, (sorry not all), of the names of the people I had the pleasure of meeting. I know the library hours, the shortest route to all of my classes, and the best ice cream flavors at Freeze.

I am no stranger to culture shock. I moved from New Jersey to Chicago when I was barely double-digits. That culture shock for me was harder than the one I am experiencing now. Even though I don’t have my parents or old friends with me now, I have much more everyday experience than I did nine years ago, which has made my transition into Bucknell easier than for most.

It has only been two weeks so I am not expecting to be fluent in the Bucknell culture by the end of the month. However, I am starting to become more comfortable at campus, and I hope that soon I will feel like a true Bucknellian.

Sydney Janitschke is a first year student, Presidential Fellow, and Mathematics Major at Bucknell University. She is from Chicago, Illinois and speaks English and Spanish.
View all posts by Sydney Janitschke →
This entry was posted in Assignment Two and tagged Bucknell, College, culture shock. Bookmark the permalink.