How We Do Things With Wordle

Posted on September 2, 2015 by Sydney Janitschke

A lot of the dominant words in Bucknell’s mission statement are Bucknell, intellectual, learning, and students as shown above in the Wordle. Other words like size and virtue are less abundant. This visual represents that Bucknell puts a lot of focus into its students and the learning environment more so than upon its size and its tradition. So even though Bucknell may be considered a smaller school, there is a high level of intellectualism on campus.

When the dominant words from Bucknell’s mission statement were entered onto nGram, it was noticeable that Bucknell is hardly ever been mentioned in any books while the more common word, student, has been used more frequently. Bucknell was only founded back in the mid 1800s which explains why its mention in books is very small. The words students and learning have been used the most frequently around the 1990s and the 2000s. A lot of reasons for the sudden increase in these word usages is because there is a much bigger global importance on education than there was a hundred years ago. Google also pulls from a lot of student handbooks like English for Students of Science.

When the words liberal and professional were added to the nGram, it became clear that those words are not used quite as frequently as students or learning. In fact, their usage has been stable or on the decline since the 1990s. I think that means that Bucknell is staying more relevant and in more modern times, by putting more emphasis on the students and the learning environment than rather having it focus on the liberal or professional aspect as was emphasized in the past. 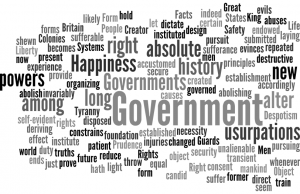 I created another Wordle by using the Declaration of Independence. The two most common words found are government and happiness. Other words that came up frequently were powers, history, absolute, and right.

I put the two words, government and happiness, into an nGram and compared the usage of the two words over time. Government has been found to be used at the same amount as it was back in the mid-1800s and at a high rate. There was a dip in the use of the word government around the turn of the twentieth century. This may be because most of the public focus settled on new inventions such as the automobile and industrialization. Government is used at a high rate in general because of how influential its rules and regulations plays into peoples’ lives. On the other hand the use of happiness has deteriorated dramatically. It does not mean that we value happiness less than we did over a hundred years ago, when happiness and freedom were what people desired. It means that we are not in direct pursuit of happiness as people were when the Declaration of Independence was written. Nowadays, in a time of technology and terrorism, we are more in pursuit of safety and security.

Sydney Janitschke is a first year student, Presidential Fellow, and Mathematics Major at Bucknell University. She is from Chicago, Illinois and speaks English and Spanish.
View all posts by Sydney Janitschke →
This entry was posted in Assignment 1 and tagged Bucknell, The Declaration of Independence, wordle. Bookmark the permalink.