A classic example of a conceptual metaphor is that of “Time is money”, the language we use when referring to time is based on the notion that 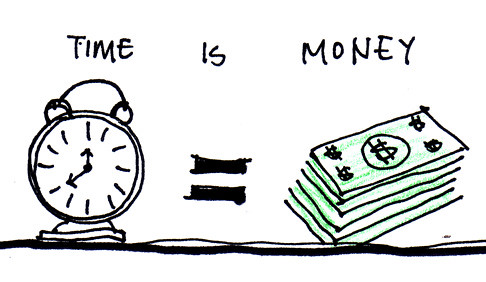 time is equivalent to money. This is proved in how we “spend”, “waste”, “save” and “run out” of time just as we do with money. Interestingly enough, not all cultures use this language when referring to time and therefore do not treat it as such.

The language we use to describe time has molded our attitudes towards it, treating time as a luxury that ought to be “saved” and “used wisely” with little room to make mistakes that could result in “loss” of valuable time. So what if we used language pertaining to seasons, love or grains of sand to refer to time?

Following are 3 other examples of popular conceptual metaphors and what this kind of language says about what we value/things we believe to be true as an English-speaking community.

We often use phrases such as “cutting language” , “barrage of insults”, and “bombarded by insults” when referring to the weapon-like power possessed by hurtful words.

Using this language says something about our society: Our acknowledgement of the effect that words can have on human beings as well as our ability to injure others with words to the same extent as we could with weapons.

This conceptual metaphor causes us to celebrate those who are “careful ” with their words, as well as to be easily susceptible to the possible hurtful meanings in words.

In the context of businesses and schools language that refers to human beings as machines is thrown around on the daily. We use phrases such as “he has a breakdown” , ” I wonder what makes him tick” , “I feel run down” and “I need to re-fuel“.

Using this kind of language when referring to human beings says something very significant about what we value within business and communities: Efficiency.

Especially within American culture we celebrate those who have the ability to work consistently and efficiently, just as a machine would do. Describing humans in the context of machinery builds up the pressure to work incessantly and to prolong “breakdowns”, resulting in a society that promotes leaving little time for self-care among workers and students.

Society as a whole can be described using a myriad of phrases, words and expressions, but all of these circle back to the overarching idea that “Society is a body”. In every day language we uses expressions such as ” the head of state” , ” backbone of society” , ” social recovery” , and ” social ills“.

The state of society is often described with words that would be used literally to describe the health of an individual, poor societal conditions are described “unhealthy” or “ill”, hence the title of this blog.

We value a “healthy” society just as we value our own personal healths and we therefore treat societal “illnesses” as such, with possible remedies in hopes of “social recovery”, as we would do if we caught the flu.

Indeed, conceptual metaphors enrich the English language, without them it would be difficult to explain our world accurately. Let us thank all that is good that we are able to describe society as a human being, for understanding it in any other context would be difficult for us English-speakers to comprehend.

Madeline (Maddie) Galvez is originally from Washington D.C with a Guatemalan and El Salvadorean ethnic background. She speaks Spanish and English fluently,has taken Mandarin for 3 years and Latin for 8 years.
View all posts by Maddie Galvez →
This entry was posted in Blog 1 and tagged communication, conceptual, humans, Language, metaphors, Money, Society, Time. Bookmark the permalink.